“Congestion is having a dramatic impact on the quality of life in the Bay Area,” said Jim Wunderman, CEO of the Bay Area Council, a business lobbying group active in transportation issues. According to the study, drivers in the San Francisco area, which includes the inner East Bay, the Peninsula and the South Bay, wasted 83 hours sitting or creeping along in traffic in 2016. Last year’s survey, which used a different methodology, ranked San Francisco second in the nation, tied with Washington, but behind Los Angeles. Bay Area drivers in 2015 wasted 75 hours in traffic. Congestion causes San Francisco-area drivers $1,996 a year per person in wasted time, Inrix concluded, compared with a national average of $1,400. […] Bob Pishue, Inrix’s senior economist and study co-author, said San Francisco’s congestion during the morning and evening commutes is the worst in the nation, particularly on city streets. In the Bay Area, Wunderman said, the long, slow commutes combined with the rising cost of housing are starting to drive away some job seekers and could have the same effect on employers. “I hear anecdotally from companies all the time about problems with people getting to their jobs,” Wunderman said.

This puzzling paradox continues. The San Francisco Bay Area and nearby Silicon Valley are home to many of the world’s information and communications technology (ICT) leaders. But the region continues to function as if it were 1965 when everyone commuted to the office because there was no Internet yet and all the tools knowledge workers needed to do their jobs were still at the office. And that none of the innovations its companies have created exist, tools that have decentralized knowledge work and the centralized, commute-in office, effectively obsoleting daily commute trips that are choking its streets and highways.

Los Angeles has topped the INRIX Global Congestion Ranking to be named the most gridlocked city in the world. Carried out by INRIX, Inc., experts in transportation analytics and connected car services, the research looked at traffic congestion in 1,064 cities across 38 countries worldwide, making it the largest study ever of its kind.Los Angeles took the number one spot after the results revealed that in 2016 drivers in the city spent 104 hours in congestion during peak time periods, followed by Moscow (91 hours), New York (89 hours), San Francisco (83 hours) and Bogota (80 hours). Sao Paulo came in sixth, followed by London, Atlanta, Paris and Miami. The US was also named the most congested developed country in the world, with the country accounting for 11 of the top 25 cities worldwide with the worst traffic congestion and with drivers on average spending 42 hours a year in traffic during peak times.

Source: Los Angeles named the most gridlocked city in the world

The Industrial Age has shown we can’t build our way out of gridlock due to what transportation planners term induced demand. Self driving cars and “smart city” traffic controls aren’t the answer either. There’s only so much real estate in crowded metro areas. That’s why they are congested and housing there sells at a premium beyond the reach of most.

We already have the “killer app” to address this problem in the increasingly post industrial, information economy: Internet-based telecommunications technology. It eliminates the need for unnecessary peak hour travel to centralized, commute-in offices since it enables the knowledge and information work traditionally done in offices to be accomplished most anywhere. One no longer needs to sit for hours in rush hour traffic to send email to co-workers and clients, write a report or collaborate on a project.

There are also adverse health as well the obvious environmental impacts of so many vehicles idling on clogged freeways. All that sitting and stress contributes to preventable health conditions as it becomes apparent that like adding more freeway lanes to ease traffic congestion, we cannot medically treat or spend our way to health. Office workers need to get off their butts and out of their cars move around and be active. The most accessible setting for most is in their communities, using the freed up time now unnecessarily wasted on commuting.

The biggest constraint, Holman said, is a lack of available land. “Southern California is pretty spread out and opportunities for large-scale developments are often far from where people want to live,” he said.

People naturally want to live close to where they work in the traditional, Industrial Age paradigm where they work in centralized, commute-in locations. Problem is as this article illustrates is that concentrates demand that drives up the cost of housing to the point that it becomes unaffordable for most. 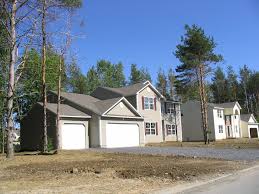 This is where today’s advanced information and communications technology (ICT) offers a solution at least for the many knowledge workers who engage in the no win tradeoff of commuting long distances in search of affordable housing. ICT distributes knowledge work out of high cost metro centers, making it possible to perform in outlying and less densely populated areas where housing dollars go further. That’s why major federal infrastructure plans currently under consideration should include funding for telecommunications infrastructure that puts these areas on a par with that found in densely populated areas.